Problem Solving Series Starts January 11. Sign up now!
Get free weekly activities like this, straight to your inbox. 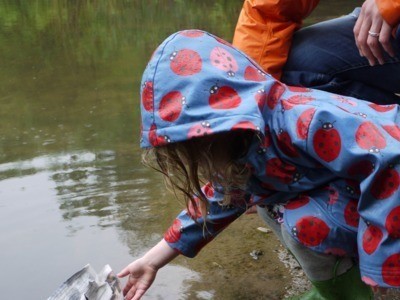 What Floats Your Boat

Although a dubious role model, Curious George has many qualities we would love for our kids to emulate. He is personable, optimistic, self-directed, persistent and, of course, curious. He may get himself into trouble, but he always learns something and makes friends along the way.

In one of the classics, Curious George Rides a Bike, George, shirks his paper route duties to play in a nearby river, deciding to fold the undelivered newspapers, origami-style, into boats and set them sail. Not only would we hope our daughters would be curious and self-directed enough to experiment in such a way, but we suspect Curious George’s creator, H.A. Rey, would agree. For, in the story, he included step-by-step directions for how to make the boats George put into the river. How could he not be have been hoping young readers would give it a whirl?!

One night, after reading this story for the umpteenth time, we got to wondering about how many kids have actually tried this. We figured that most kids, like ours that night, read the story and didn’t even consider folding paper into a boat, even though the invitation to do so was right there in the book. What a missed opportunity! Why not try it? Wouldn’t that model both curiosity and the behavior of a good reader if we decided to put George’s boat making process to the test? We had already planned to mess around with water and floatation with the girls, so this seemed a perfect way to set such explorations in motion.

So, the next morning, we packed up the book and some string, set off to buy a newspaper (how quaint!) and trotted down to a local pond to put our ambition to the test. What followed was nearly an hour of fascinating, guided play, including: folding; redesigning; launching; rescuing; offering passage to seed pod and stick friends; comparing floatation qualities of other boat materials; and, ultimately determining the point at which our fleet of paper boats and their fearless captain were simply too soggy to sail on.

Clean up: Try to rescue as many of the boats as you can (i.e. try not to litter). A good, long stick can help you reclaim boats. You can also punch a hole in one end of each boat and tie a string through the hole so kids can tug, steer and keep hold of the boats.

Why is this activity great for kids?

There is nothing cooler (or more good-habit-forming) to kids than wondering and asking about something, then actually taking the time to experiment and answer that question. And, if we want our kids to drive their own learning, we need to help them build as much curiosity and confidence as we can. Furthermore, subtle as it may seem, just by modeling questioning what we read in books (or see online or on TV) builds a strong foundation for critical thinking skills.

Just posing the question about whether or not something will float vs. sink and then trying to see if paper boats could float helps kids develop their understanding about fluids and density, abstract concepts that can be hard to grasp. The more experience kids get with asking and answering that question, the better able they will be to formalize the concepts in school. They will have a feel for it, and that will give them a real advantage.

Remember, it's about more than the boats—Even though she was really into the boats, Maeve continued to break off to play in muddy puddles, toss objects into the water and stir the pond water with sticks. And, rather than drag her back to the boats, we let her decide what to be interested in and when. Kids learn to direct their attention and stay on task by practicing or, in these cases, bouncing from thing to thing and back again. So, let them. They'll need that ability to focus in order to learn in a classroom and, eventually, to solve complicated problems, learn complex concepts, finish great novels or, better yet, write their own some day!

Weekly virtual session with a Tinkergarten Leader with song, movement and the week’s play lesson.

Reinforce the lesson with the three activities in your at-home guide. Keep kids learning all week.

Great deals on DIY kits designed for learning through play. Check out the Circle Time Essentials Kit to make the most of this season!