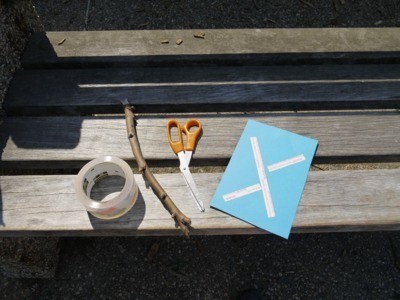 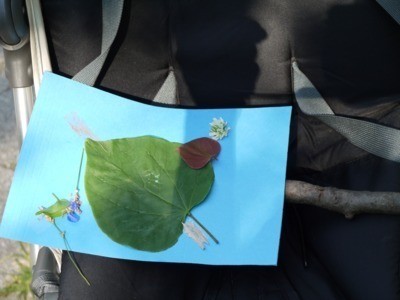 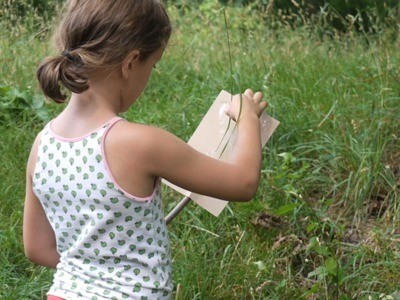 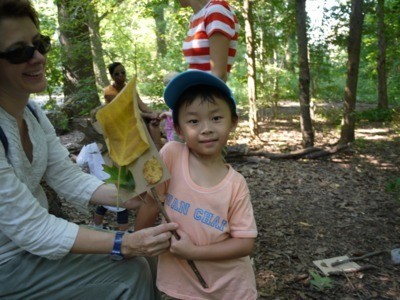 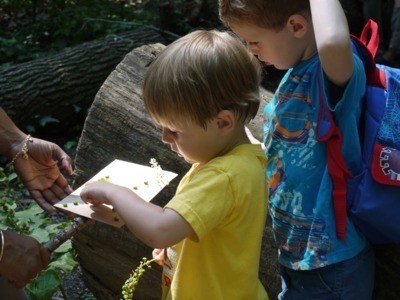 Although parents have to make calls about when hot is just too hot for kids, kids and adults alike are capable of contending with the heat more than we think. A little diversion goes a long way, and building and decorating a “nature fan” is just the thing kids need to feel in control of their own physical comfort and enjoy being both maker and master of a powerful tool—a functional fan. Searching for objects to adorn the fan, arranging the objects and designing the fan itself are all powerful creativity boosting tasks. Get them talking about their fan and their process, and you sneak in building communication skills and self esteem. It'll definitely make you glad you and your kiddos left the AC behind to brave the heat.

Why is this activity great for kids?

Kids benefit from this activity in several ways, beyond being able to stay more focused after they get more comfortable in the heat. The pride they derive from making a nature fan "all by themselves" and the chance to take their comfort into their own hands builds self reliance, which is so hard to teach these days. Examining all the amazing sights, smells and textures in nature builds on their inherent curiosity and requires kids to use multiple senses carefully in the search for natural decorations. Putting the fan together and then imagining and trying out different ways to use their nature fans gives kids several ways to develop creativity. Whether or not you challenge kids to find a category of objects, all ages have to pay attention and stay focused on the task at hand as they hunt for objects and decorate their fans.

Join a live 30-minute session filled with movement, song, and one of our favorite play activities.

Meet a Certified Tinkergarten Leader who will explain the program and what to expect in class.

Get a sample At Home Curriculum Guide to extend your child’s play throughout the week.
Sign Up Now
​

By creativity, we mean the ability to both imagine original ideas or solutions to problems and actually do what needs to be done to make them happen. So, to help kids develop creativity, we parents need to nurture kids' imaginations and give them lots of chances to design, test, redesign and implement their ideas.

We could not agree more with Sir Ken Robinson that,

"Creativity is as important now in education as literacy, and we should treat it with the same status.”

Why, you ask? For one, it is through being creative that a person is able to get senses, sensibility and spirit working together. Simply put, without creativity, we don't think our kids will live a full life.

On a more practical level, it's also the means by which humans of all ages make an impact on the world and other people around them. A lot of heavy stuff is going to go down in our kids' lifetime, and their generation will need to imagine and implement solutions to big and very complicated problems. Although our kids are still far from public office or the boardroom, today's political and business leaders worldwide are already pointing to creativity as the most important leadership quality for the future.

Although years from the art studio or design lab, little kids can learn to think and act creatively if you give them time and the right practice.

What is a Naturalist?

The oldest and simplest definition, “student of plants and animals,” dates back to 1600. The term has evolved over time, it's importance changing as the values of dominant culture have changed. 400 years after that old definition, Howard Gardner, the paradigm-shifting education theorist, added “naturalist” to his list of “multiple intelligences.” Gardner challenged the notion that intelligence is a single entity that results from a single capability. Instead, he recognizes eight types of intelligence, all of which enable individuals to think, solve problems or to create things of value. To Gardner, the Naturalist intelligence enables human beings to recognize, categorize and draw upon certain features of the environment. A true naturalist has not simply Googled and learned the names of plants, animals, rocks, etc. Rather, he or she has had direct experience with them, coming to know about them and using all senses to develop this intelligence. A naturalist also has a reverence for nature, valuing and caring for living things from the smallest mite to the tallest tree. A naturalist comes to not only knowing the creatures and features of his or her environment, but treasuring them in thought and action.

In the process of becoming a naturalist, children become stewards of nature, a connection that is associated with a range of benefits, including greater emotional well-being, physical health and sensory development (not to mention the benefits to nature itself!). In a world in which primary experience of nature is being replaced by the limited, directed stimulation of electronic media, kids senses are being dulled and many believe their depth of both their interest in and capacity to understand complicated phenomena are being eroded. To contrast, the naturalist learns about the key features of their natural environment by using all of his senses and be interpreting open-ended and ever-changing stimuli.
​

What is Sensory Development?

Although some scientists classify as many as 20 senses, when childhood educators talk about "developing the senses," we typically mean developing the five standard senses: sight, hearing, touch, smell and taste. In addition to honing these senses, educators care about sensory integration, which is the ability to take in, sort out, process and make use of information gathered from the world around us via the senses.

The better kids are able to tune and integrate their senses, the more they can learn. First, if their senses are sharper, the information kids can gather should be of greater quantity and quality, making their understanding of the world more sophisticated. Further, until the lower levels of the brain can efficiently and accurately sort out information gathered through the senses, the higher levels cannot begin to develop thinking and organization skills kids need to succeed. Senses also have a powerful connection to memory. Children (and adults) often retain new learning when the senses are an active part of the learning. So, if kids have more sensory experiences, they will learn more, retain better and be better able to think at a higher level. Makes the days they get all wet and dirty in the sandbox seem better, doesn't it?
​

What is Self Reliance?

Nearly all parents agree that we want to raise our children to become independent and self-reliant people. When they are babies, children rely on us for their basic needs and mobility. As they grow, they rely less directly on us for these basic needs but still need us for love, protection, direction and help. As they grow into adolescence and early adulthood, they will rely on us less and less, separating from us to prepare for the transition to adulthood. Even though much of the separation dance plays out during adolescence, how we offer our kids both support and independence in their early years paves the way for them to develop self reliance later on. Many well-intending parents may become too involved, protective or demanding of their children and, by doing so, actually foster dependence in them. In turn, their kids grow to rely on others for motivation, happiness and direction, unable to make sound decisions for themselves. Independent children, however, possess the belief that they are competent and capable of taking care of themselves. They were given the freedom to experience life and learn its many important lessons, both the joyful and the not-so-fun ones that come from taking risks and doing things for and by oneself.

Independent children emerge as intrinsically motivated, natural explorers. They are capable decision makers who have had practice weighing various options and, with the support and guidance of their parents, have been allowed to and lived by their own decisions. This kind of self reliance helps children navigate all realms of life. Academically, they advocate for themselves, take chances and try new things. Socially, they are less dependent on others for happiness, making them far more likely to weather the ups and downs of young friendships and social power dynamics. They have likely had the chance to identify and pursue their own interests and, therefore, have a rich sense of self. They are also more likely to make sound judgements and far less susceptible to engage in negative behaviors, succumb to peer pressure or become either bully or victim. As children grow into adulthood, these same patterns continue to play out. Self-reliant adults have an easier time feeling happiness, self-respect and the respect of others. They are better decision-makers and often accomplish more given the self confidence and self awareness that comes from having been allowed to try, succeed, fail and learn along the way.   “Trust thyself: every heart vibrates to that iron string.” - Ralph Waldo Emerson, Self-Reliance